When electrical equipment is used in, around, or near an atmosphere that has flammable gases or vapors, flammable liquids, combustible dusts, ignitable fibers or flyings, there is always a possibility or risk that a fire or explosion might occur. Those areas where the possibility or risk of fire or explosion might occur, due to an explosive atmosphere and/or mixture, are often called hazardous (or classified) locations. Currently, there are two systems used to classify these hazardous locations: the Class/Division system, used predominately in the United States, and the Zone system, generally used in the rest of the world.

What’s Needed for An Explosion? 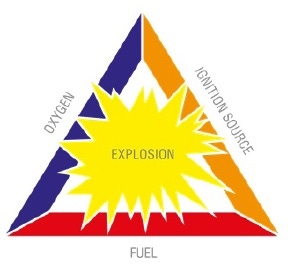 The most common types of reaction are between flammable gases, vapors or dust with oxygen in the surrounding air.  As a rule, three basic requirements must be met for an explosion to take place in atmospheric air:

Note: both the flammable substance and the oxygen must be present in the correct mixture for the explosion to happen.

How is the Explosion Controlled?

Three principles ensure that electrical equipment does not become a source of ignition:

Standard classification systems provide a concise description of the hazardous material that may be present along with the probability of it being present so that the appropriate equipment may be used and safe installation practices followed.  In North America, the classification system most widely used is defined by the NFPA Publication 70, NEC and CEC.  They define the type of hazardous substances that is or may be present in the air in sufficient quantities to produce an explosion.  The NFPA establishes area classifications based on Classes, Divisions and Groups which are factors combined to define the hazardous conditions of a specific area.

The table below summarizes the various hazardous (classified) locations:

These are the Hazardous Location Classifications for the Macromatic ISD & ISE Series of Intrinsically Safe Barrier Relays: